According to this invoice from Rindle Replacements, this furnace has a failed inducer motor. Play the video. See or hear anything wrong with that inducer motor?

Rindle’s price to replace that working inducer motor was $1,072. The top-right of their invoice breaks it down: $949 for the motor, $64 for shipping and $59 for the diagnostic. The homeowner had the choice of paying $759, $49 and $19 respectively had she signed up for their membership program. Of course no one in their right mind puts that much money into a twenty-five year old furnace, right? Right. So the repairman recommended a new furnace and air conditioner for $13,152. Now that’s much money. 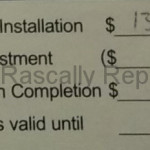 Why would Rindle tell such naked lies? Because the furnace’s problem was intermittent. The furnace ran normally while I was there. I suspect it did the same for Rindle a few days ago. Their repairman had to come up with something or there’d be no commission. For some reason the homeowner suspected the inducer motor was the culprit, so the repairman turned that suspicion into his fake diagnosis. Confirming what someone already thinks is naturally convincing in any situation. To help perpetuate the myth, the repairman left the furnace disabled.

If the inducer motor had been the real problem, I would have charged around $450 out-the-door to replace it – shipping included because I carry one on the van. It costs me about $100. As for the real problem, it’s most likely the circuit board. This particular circuit board is known for going bad in such a way that it will intermittently fail to energize the gas valve. Or at least that’s known to real repairmen that have been doing this a while. This known problem matches the homeowner’s description of the symptoms perfectly. 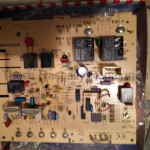 Fortunately for this homeowner, Rindle’s naturally convincing lie did not convince because the repairman laid it on too thick. He went on and on about how unsafe the furnace is, scoured the equipment looking for minor problems to harp on, told the hot spot lie (See a different furnace’s so-called hot spots here.) and even pulled out hackneyed lines like “What do I have to do to earn your business today?” I can’t imagine hearing such a tired cliché in this day and age, but a natural born seller will do what comes naturally.