“You love arguing with me!“

Of course they, whoever they are, try not to be too obvious about it. But no matter how cleverly they package the commercial, you still know they’re selling you something. Or do you? When it comes to the tune-up special, you may not. You may think you’re getting your old furnace tuned up when, in fact, you’re watching  an hour long argument for buying a new furnace.

To illustrate I give you the story of two tune-ups performed by Muridae Mechanical, one tune-up was performed on the downstairs furnace… 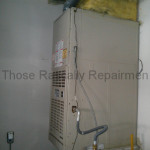 …and one on the upstairs furnace. 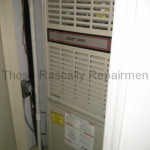 The homeowner had the tune-ups performed because the downstairs furnace was acting up. Muridae’s repairman diagnosed a failing circuit board and a weak capacitor. The circuit board was turning the blower on when it wasn’t supposed to. And as pictured below (click it to enlarge), the 5.0 microfarad capacitor was only putting out 1.6 microfarads. 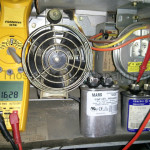 They quoted nearly $1000 to replace the circuit board and capacitor. (Those parts cost $65 wholesale and it takes an hour to replace them.) Most contractors will tell you that spending a thousand dollars on a very old furnace is a waste of money. They might be right. So as noted on the invoice below, they scheduled an appointment to give the homeowner an estimate for a new downstairs furnace. 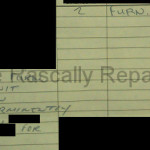 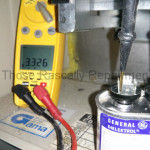 Additionally, I found a loose wire in the downstairs furnace. Look closely at the picture below. Compare the red, black and white wires. As you’ll see, the red wire was not fully inserted into its outlet. 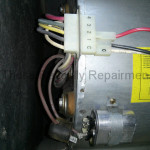 Why the incredibly expensive repair prices? Why the push to replace just the downstairs furnace when the upstairs furnace and both air conditioners are just as old? Why the loose wire? Why call out the first bad capacitor but not the second? Why the loose filter? Because most tune-up specials are, in reality, specialized commercials. Muridae was on a mission to sell the homeowner a new furnace and they needed a convincing argument:

One might argue that their mistakes with the upstairs furnace’s filter and capacitor and the downstairs furnace’s loose wire were not intentional. That’s awfully nice, but awfully unlikely. I just don’t think they “accidentally” failed to take care of three things that are part and parcel of a tune-up. I do think that, kind of like me, they’re know-it-all contractors that love to argue. But in their case their love of argument is the love of sales. And in that they are indeed all-knowing.