According to this invoice from Havoc Heating, this furnace has a failed inducer motor. Play the video. See or hear anything wrong with that inducer motor?

Starting today’s post off like yesterday’s is a bit misleading. While there are some distinct parallels between them, there’s also one key difference. As where there was never anything wrong with yesterday’s inducer motor, there used to be something wrong with today’s inducer motor. It used to screech loudly, so the homeowners called a repairman to fix it. Then they called another. Then they called another.

Havoc Heating got the first call. Their finely tuned ears were all they needed to condemn the old inducer motor. Or at least I assume their ears were all they needed because they didn’t use their fingers. That is to say, they didn’t even touch the old inducer motor. They offered to replace it, but insisted that replacing the whole furnace was the best thing to do. There were so insistent that the homeowners sent them packing.

Wayfarer Heating & Air got the second call. Their repairman also pushed for a new furnace, but at least he touched the old inducer motor. He didn’t actually remove it from the furnace to inspect it which, you know, would’ve been a nice thing for a repairman to do. But he did manage to get rid of the screech by placing shims between the inducer motor and the collector box it’s mounted to. The shims are pictured below. 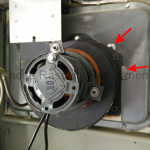 The screech returned yet again. I got the third call. I pulled the old inducer motor completely out of the furnace and looked at it because, you know, it’s really nice when a repairman spends a few minutes diagnosing a problem. I found that the setscrew holding the wheel in place had come loose. That allowed the wheel to migrate down the shaft and scrape against the collector box, hence the screech. 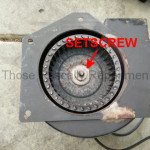 A loose setscrew was the problem all along. Havoc and Wayfarer could’ve figured that out. They didn’t want to. Like yesterday’s contractor, they decided it was time for the homeowners to buy a new furnace whether they wanted to or not.

I tightened the setscrew, put the furnace back together and took the video you saw above. The furnace is getting old, so other problems may eventually crop up. But for the moment at least it’s purring like a kitten. Au’s well that ends well.