“That’s one small step for man, one giant leap…“

That was an incredible moment, not that I was alive to see it live. ;^) Thankfully I was alive and heard the following from a homeowner today.

“My experience with them is that they’d rather do installation than service work.“

That quote will never make history, but I’ve been saying that throughout my professional history. The typical contractor’s primary goal is to replace your furnace and air conditioner. Everything else takes a backseat, including servicing the very equipment they installed. When you can actually get them to perform service, they either don’t have a clue and/or they stick it to you for exorbitant sums.

Our quotable homeowner was speaking of Mad Hatter Heating & Air. (It’s too bad that name is just a pseudonym.) Consider his experience with Hatter in just the last few of the many years he’s worked with them… 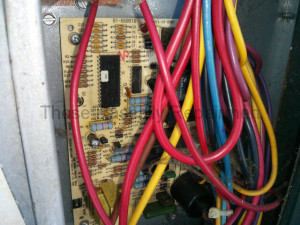 See anything burned on that board? I don’t either. They recommended the new board a couple of years ago. The unit has worked fine since. However, I did find a burned spot on the capacitor. It sits under the circuit board. 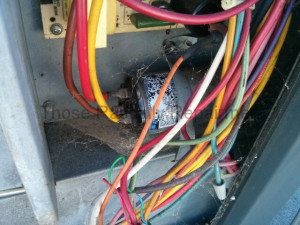 As you can see, one of the terminals on the old capacitor is deformed from excessive heat. 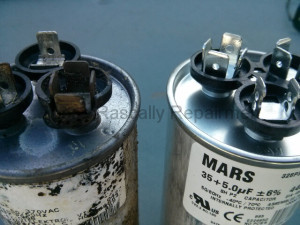 The damage to the capacitor may be relatively new, so I don’t know if that was the real reason for the thousand dollar recommendation. What I do know is that capacitor costs less than $20.

I also know that code requires the exposed PVC drain lines they installed to be painted and the ducts they connected to be insulated. The latter is especially important because uninsulated metal ducts produce a lot of condensation that can lead to mold growth. 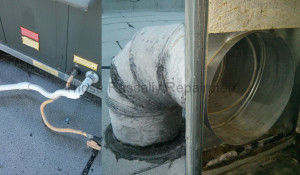 Evidently proper practice, a seemingly small step for a repairman, is too giant a leap for Mad Hatter’s kind.