I’m booked for days. I spoke with a homeowner this morning who couldn’t wait, so she made an appointment with Hygienic Heating & Air. I’ve followed behind HH&A before. As you can see here, it wasn’t pretty. Knowing what might happen, I invited her to call or text and bounce their diagnosis off me. 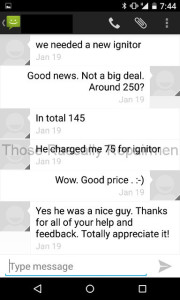 As you can see, the problem turned out to be a bad igniter. Igniters are easy. You can learn how to replace them on YouTube. So it’s no surprise that HH&A pulled it off. What’s more and what’s worse is that they only charged her $145. I would’ve charged around $100 more than that. A typical mega-contractor would’ve charged a hundred more than me.

So why is a low price “worse”? Because it may have given the homeowner the impression that HH&A is cheap and good. There’s no such thing. They were cheap this time. As the linked post attests, they’re by no means good. If they’re ever called back for a harder problem, she may learn that the hard way.